Alzheimer's disease symptoms can be recapitulated in the zebrafish 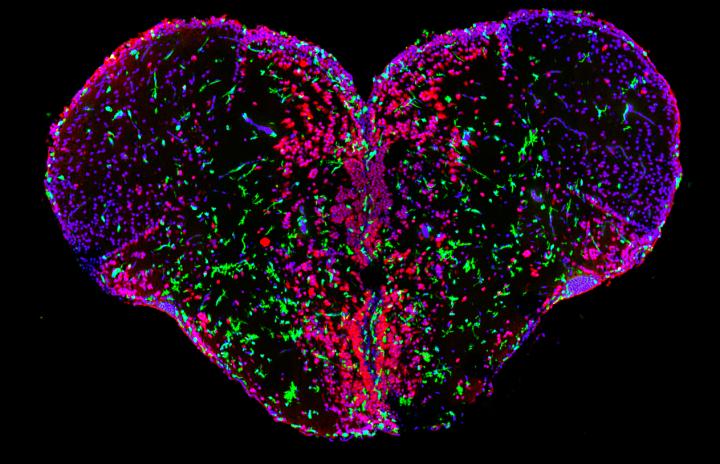 CAPTION: The zebrafish brain has an outstanding regenerative ability, which also manifests after neurodegenerative disease-like conditions. Dr. Caghan Kizil and colleagues generated an Alzheimer's disease model in the adult zebrafish brain, and showed that this remarkable aptitude is enabled by a specific neuro-immune crosstalk. This dynamic interplay activates the proliferation of neural stem cells and subsequently triggers the formation of new neurons. The image shows the spatial organization of immune cells (green) and neurons (red) on a cross section of adult zebrafish forebrain (cell nuclei: blue). Image acquired in Kizil Lab, CRTD and DZNE, Helmholtz Association.

Two proteins (Interleukin-4 and STAT6) have been identified to be relevant for this process. This is a big step towards the understanding, prevention or even healing of Alzheimer's disease - a disease with about 170,000 new cases diagnosed every year in Germany. The results have been published in the scientific journal Cell Reports this week.

Alzheimer's disease is the most common form of dementia. Affected people are troubled with symptoms like memory loss, disorientation or changes in behavior. Patients are affected in their day-to-day life and are dependent on the help of others. Alzheimer's disease accounts for 60 to 80 percent of dementia cases worldwide, mainly affecting people above the age of 65. Alzheimer's disease has no current cure, which together with the high number of new cases each year emphasizes the high relevance of research in this field.

The study of the laboratory of Dr. Caghan Kizil used the animal model zebrafish, which can regenerate their brain. Zebrafish have an extensive ability to replenish the lost neurons after various types of damage, and the team led by Dr. Kizil showed that it can also do so after Alzheimer-like neurodegeneration. This is an ability humans do not have. Evolutionarily, the zebrafish and human beings are very similar: the cell types in the zebrafish brain and their physiological roles are very similar to humans, and more than 80 percent of the genes humans have are identical in the zebrafish. Therefore, zebrafish are an ideal model for studying complex diseases of humans in a very simplistic way. "We believe that understanding how zebrafish can cope with neurodegeneration would help us to design clinical therapy options for humans, such as for Alzheimer's disease. Within this study, we observed Alzheimer-like conditions in the fish brain. We found that zebrafish can impressively increase the neural stem cell proliferation and formation of new neurons even after Alzheimer's-like pathology. This is amazing because to treat Alzheimer's we need to generate more neurons. And this all starts with neural stem cell proliferation, which fails in our diseased brains", Caghan Kizil explains.

This study has shown that Alzheimer's disease symptoms can be recapitulated in the zebrafish brain using a short section of human APP protein that is a hallmark of Alzheimer's disease (Amyloid-β42). This protein part causes the death of neurons, inflammation, loss of neuronal connections and deficits in memory formation in zebrafish. Caghan Kizil's research group including the lead author involved in the study, Prabesh Bhattarai, found that the immune-related molecule Interleukin-4 (which is also present in the human brain) is produced by the immune cells and dying neurons in the fish brain. This molecule alerts the neural stem cells that there is danger around. Stem cells then start to proliferatethrough a cell-intrinsic mechanism involving another protein of central function called STAT6. The importance of this study lies in the notion that the diseased brain and the inflammatory milieu there can be modulated to kick-start neural stem cell proliferation, and this is exactly what successfully regenerating vertebrates do.

The next steps towards an understanding of Alzheimer's disease are clearly defined: "We will go on identifying more factors required for a successful 'regeneration' response in fish brain after an Alzheimer's disease-like situation. By doing so, we can get a more complete picture of the molecular programs beneficial for tackling this atrocious disease. Zebrafish will tell us the candidate genes we should focus on in our brains for possible regenerative therapies. I believe that we can come up with meaningful therapies only by combining an increase inthe proliferation of stem cells with the existing methods of prevention (existing drugs, rehabilitation approaches, preventive precautions etc.)", Caghan Kizil says.


Back
We use cookies to ensure that we give you the best experience on our website. If you continue to use this site we will assume that you are happy with it.OkRead more